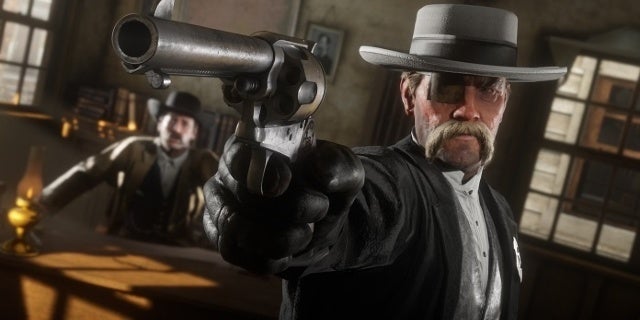 Red Dead Online’s latest update is a big release in more ways than one. While it’s got much more content included than your typical update, it also marks the arrival of an important milestone for the online game. It’s leaving the beta phase that it’s been in since its release, but Rockstar Games says the emergence of the mode is just the start of what’s to come. This update itself is an example of that with new game modes, events, and combat PvP systems put in place.

Rockstar detailed the contents of its Red Dead Online update in a post on the studio’s site that encompassed everything included. It’s an extensive list of changes that touch on all different areas of the game from missions to general game balance Plans for the future of the game will look familiar to those who have been playing Grand Theft Auto Online with more characters and game modes added in the next few weeks along with weekly bonuses and sales for players to take advantage of.

The revenge saga of Jessica LeClerk continues with new missions in A Land of Opportunities.

Battle the Del Lobos gang as a Gunslinger or pull off a daring high-stakes theft as an Outlaw – before a rendezvous in Blackwater with a shifty adversary.https://t.co/GNcDNC3QSX pic.twitter.com/4gytJ3CBpP

Parts of the new content can be seen in the trailer above that makes more sense after you read through the patch notes. One of the most notable changes is the addition of Offensive and Defensive playing styles. Players who set themselves as “Offensive” will interact with others like they normally would and can engage in PvP action unrestricted, but those who are playing with the “Defensive” setting will have protections against others.

“Players in Defensive mode will be indicated by a shield icon, will take reduced damage from enemy players, cannot be lassoed, melee attacked, executed or targeted with auto-aim,” Rockstar’s update notes said. “Defensive players will also be excluded from being targeted in PvP-related missions such as Player Assassination. Those who attack Defensive players receive hefty penalties via the Hostility system, while players who initiate conflict while in Defensive mode will be instantly pulled out of Defensive mode and also receive similar Hostility penalties.”

New character roles will be added this summer, and there are also plans to give PlayStation 4 users some more early access content. Details on those plans and more can be seen here.

On today’s episode, we talk about how playing too much Pokemon changes our brains as kids, the new Pokemon Unbroken Bonds Trading Card Game set, Detective Pikachu coming to Pokemon GO!, and more! Make sure to subscribe now to never miss an episode!