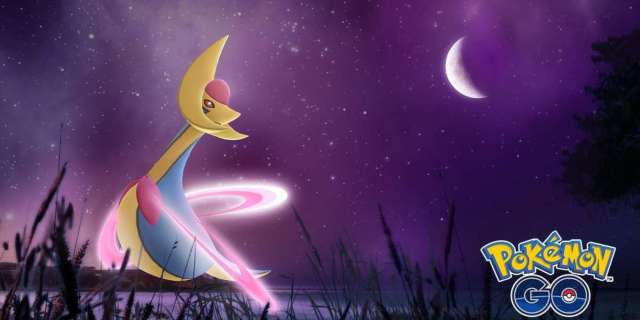 Pokemon Go will be adding another Shiny Pokemon next week, and this time it’s a Legendary Pokemon. Earlier today, Pokemon Go announced plans for the next few weeks of Legendary Raid battles, with several Legendary Pokemon returning for a new set of raids. The Legendary Pokemon Cresselia, Groudon, and Kyogre are all returning to Raids in the coming weeks, with Cresselia having its Shiny variant added as an extra motivation to participate in the upcoming battles. Cresselia will appear in raids from May 27th through June 18th, followed by Kyogre’s return from June 18th to June 27th, and Groudon appearing from June 27th to July 10th.

Shiny Pokemon are Pokemon with variant colorations and are usually quite rare. A Shiny Cresselia has a dark purple body and blue cresents coming out of its body as opposed to its usual shades of pink. While most Shiny Pokemon can be found in the wild, the Shiny version of Cresselia can only be encountered after beating one in raids. Both Kyogre and Groudon also have Shiny variants currently available in Pokemon Go, so the big draw for the next month will be obtaining Shiny Legendary Pokemon to obtain for your collection.

The new raid schedule also teases that “Gen 5” Pokemon won’t be coming in the very near future. Pokemon Go just wrapped up its rollout of Gen 4 Pokemon, but it looks like its giving itself a bit of a buffer before starting the release of even more Pokemon later this year. It’ll be interesting to see how the rest of the Legendary Raid schedule plays out this summer, and whether Pokemon Go focuses on adding more Shiny Legendary Pokemon during what’s usually a high traffic time of the year for its game.

The new Legendary Raids begin next Monday, May 27th.

On today’s episode, we talk about when we’ll get Pokemon: Sword & Shield news is coming, we get an update on the Detective Pikachu box office, Leafeon & Glaceon being added to Pokemon GO, and more! Make sure to subscribe now to never miss an episode!

We also have a bonus episode that you can out by clicking here or listen below.

We talk go deep into spoiler territory with the writers of Detective Pikachu! Dan Hernandez and Benji Samit join our hosts and answer every question you could think of about the film including what didn’t make the cut and fun Easter eggs.