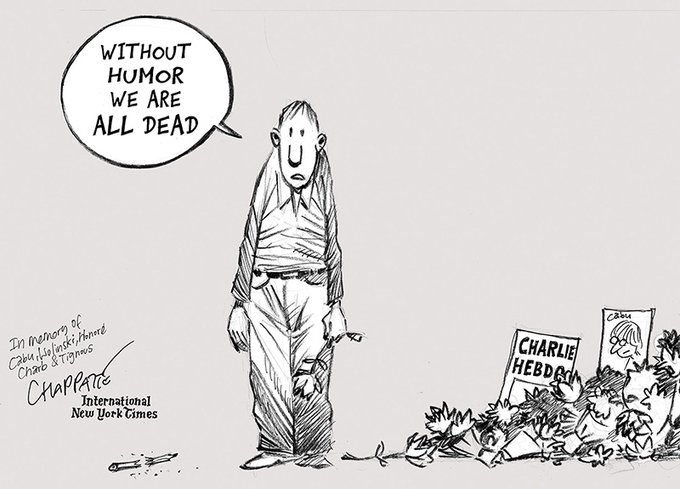 In the wake of a social media outcry about an anti-Semitic cartoon featuring Benjamin Netanyahu  published in its international edition, the New York Times has ceased running any political cartoons at all.

The news was first broken by cartoonist Patrick Chappette, who was angry and disappointed at the move.

In 20-plus years of delivering a twice-weekly cartoon for the International Herald Tribune first, and then The New York Times, and after receiving three OPC awards in that category, I thought the case for political cartoons had been made (in a newspaper that was notoriously reluctant to the form in past history.) But something happened. In April 2019, a Netanyahu caricature from syndication reprinted in the international editions triggered widespread outrage, a Times apology and the termination of syndicated cartoons. Last week, my employers told me they’ll be ending in-house political cartoons as well by July. I’m putting down my pen, with a sigh: that’s a lot of years of work undone by a single cartoon – not even mine – that should never have run in the best newspaper of the world.

I’m afraid this is not just about cartoons, but about journalism and opinion in general. We are in a world where moralistic mobs gather on social media and rise like a storm, falling upon newsrooms in an overwhelming blow. This requires immediate counter-measures by publishers, leaving no room for ponderation or meaningful discussions. Twitter is a place for furor, not debate. The most outraged voices tend to define the conversation, and the angry crowd follows in.

The Times released a statement regarding the move in a tweet, stating that “We plan to continue investing in forms of Opinion journalism, including visual journalism, that express nuance, complexity and strong voice from a diversity of viewpoints across all of our platforms.”

The Times has not had editorial cartoons in its US edition – a break from most newspapers of its era – but had been running them in their international edition.   However that ended when the inappropriate Netanyahu cartoon from a syndicated cartoon bank was published. The editor who let it go throughwas disciplined and the Times vowed to only work with its own cartoonists – such as Chapette – but even that was deemed  too risky.

The Times has never been particularly cartoon friendly, but still the move came amidst declining work opportunities for editorial cartoonists around the country, due to shrinking newspapers, despite the powerful and honored heritage of cartoonists from R.F. Outcault to Pat Oliphant and today’s sharpest pens.

And cartoonists took to twitter to decry the move, including a statement from Kevin Siers, president of the Association of American Editorial Cartoonists.

Everyone from Ann Telnaes to Jen Sorenson also spoke out.

This is the response the NY Times gave when I explained I was cancelling my subscription because they dropped all editorial cartoons. pic.twitter.com/hchL6Sz23m

NY Times prints one awful cartoon & now decides to stop running cartoons. By this logic, the paper should have shut down after its 2002-2003 WMD reporting. https://t.co/dJUYfElAE7

When the NYT publishes a story or a photo that they later have to apologize for, they don’t just END all photos and stories! This is a despicable response from a newspaper that won a Pulitzer last year for editorial cartooning. #cartoons #satire #NYTimes https://t.co/ciuaNskopz

When the NYT publishes a story or a photo that they later have to apologize for, they don’t just END all photos and stories! This is a despicable response from a newspaper that won a Pulitzer last year for editorial cartooning. #cartoons #satire #NYTimes https://t.co/ciuaNskopz

Since the days of Nast nothing can pierce in public discourse like a powerful editorial cartoon. The NY Times decision to fire @PatChappatte and eliminate cartoons altogether (for a cartoon he didn’t even draw!) is a cowardly display of pandering to their critics. https://t.co/QPPLXRmNyw

By this standard of blaming an entire medium for an editing failure, the NYT should have no columnists left. https://t.co/tsLjlrRFgv

The Times has in recent years been running longer comics as part of multi media visual projects – last year “Welcome to the New World” a “graphic novel” about the Syrian Refugee crisis won a Pulitzer Prize. So they would seem to have incentive to understand the power of the word and image.

While many alternative venues for editorial cartooning – such as The NibThe Nib – have sprung up in recent years, the power of the Times as a platform can’t be underestimated, and giving up on editorial cartoons entirely seems like an odd move.

Heidi MacDonald is the founder and editor in chief of The Beat. In the past, she worked for Disney, DC Comics, Fox and Publishers Weekly. She can be heard regularly on the More To Come Podcast. She likes coffee, cats and noble struggle.

KINGDOMS OF AMALUR is getting a RE-RECKONING, and creators including Todd McFarlane don’t seem to be getting a cut
Sega Fans Are Dunking on the Game Gear Micro
The Ninjala Open Beta Is Winning Over a Lot of Players
Here’s the full list of 2020 Eisner Award nominees
#BlackOutTuesday – THE MASSACRE OF BLACK WALL STREET expands WATCHMEN’s take on the Tulsa Race Riots