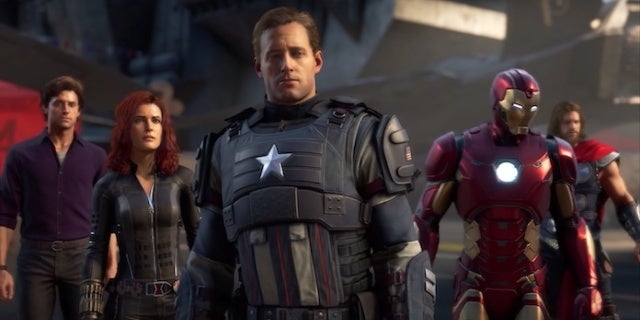 This past Monday, Square Enix and Crystal Dynamics finally revealed Marvel’s Avengers to the world, a new single-player meets live-service Avengers game coming to PS4, Xbox One, PC, and Google Stadia next May. That said, the roll out of the game hasn’t gone as well as the pair would have hoped. In addition to fans being disappointed about the lack of gameplay shown off, the Marvel faithful were also very critical of the character designs, which stray away from the designs in the Marvel Cinematic Universe. The criticism was dished out for virtually every hero and villain shown, but most of it appeared directed at Iron Man, Captain America, and Black Widow.

That all said, at the time, Crystal Dynamics said the characters and designs were its own unique take, and not supposed to be based of the designs and characters in the MCU. However, the more the Internet went to town on Captain America’s bulky, hockey player design and Black Widow’s face, the more it seemed like Crystal Dynamics may buckle and announce changes to the designs. But that didn’t happen, and according to Creative Director Shaun Escayg, it isn’t going to happen.

“We are always listening to, and welcome feedback from our community. There are currently no plans to change our character designs [though],” said Escayg while speaking to IGN.

Now, of course, this could change over time. Further, the game is currently in pre-alpha, so graphical improvements are going to happen alongside design refinement, but it doesn’t sound like any radical design changes are in the pipeline.

“The trailer is showing pre-alpha gameplay footage, which means the level of detail and overall polish of the character models will absolutely continue to improve as we get closer to launch,” added Escayg.

Marvel’s Avengers is in development for PS4, Xbox One, PC, and Google Stadia. Barring any delay, it will release worldwide on May 15, 2020. For more news, media, and information on the game, be sure to peep all of our previous coverage of the title by clicking right here. Meanwhile, as always, feel free to leave a comment or two letting us know what you think or, alternatively, hit me up on Twitter @Tyler_Fischer_ and let me know over there. Should Crystal Dynamics make design changes to the characters?

On today’s episode, we dive way deep into all the big announcements that came out of E3. All the Pokemon Sword & Shield news you could ever want and some Pokemon GO news too! Make sure to subscribe now to never miss an episode!