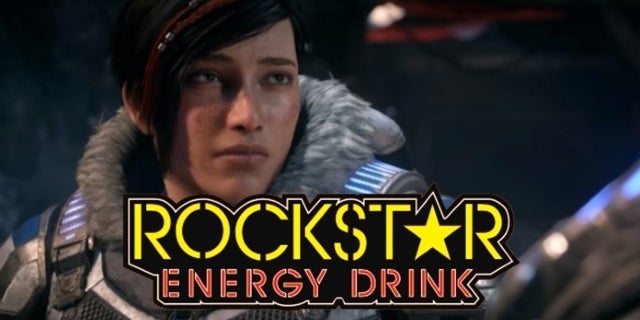 Many players already have their hands on the latest installment in the Gears of War series thanks to Xbox Game Pass, but several others still need to wait until the 10th. Luckily, the wait is not very long at this point. That said, the upcoming Gears 5 features a bounty of unlockable cosmetic items for players to customize their favorite characters and weapons. There are a few different ways for fans to unlock said items, including just playing the game and using real money to purchase the premium in-game currency. However, there is another way to unlock exclusive items and it is through the power of Rockstar energy drinks.

That’s right, codes for exclusive cosmetic weapons skins and banners can be found on specially marked Rockstar energy drink cans. The exclusivity is taken even a step further as one of the handful of different Rockstar codes can only be found at Walmart. You can check out what these items look like in-game in the tweets below, courtesy of Jeremy Conrad.

As stated above, there are several items to unlock in Gears 5, not to mention the new ones that will be coming in through the in-game store. The microtransactions that are part of the process can be a little confusing, but you can read all about those and how everything works right here.

Gears 5 is currently available on PC and Xbox One via Xbox Game Pass Ultimate, and it will officially launch for everyone on September 10th. For even more details about the latest Gears of War installment, check out some of our previous coverage as well as the brief description below:

“From one of gaming’s most acclaimed sagas, Gears is bigger than ever, with five thrilling modes and the deepest campaign yet. With all-out war descending, Kait Diaz breaks away to uncover her connection to the enemy and discovers the true danger to Sera – herself.”

What do you think about all of this? Will you be picking up some Rockstar energy drinks to get your hands on the above skins and banners? Sound off in the comment section below, or feel free to hit me up over on Twitter @anarkE7!