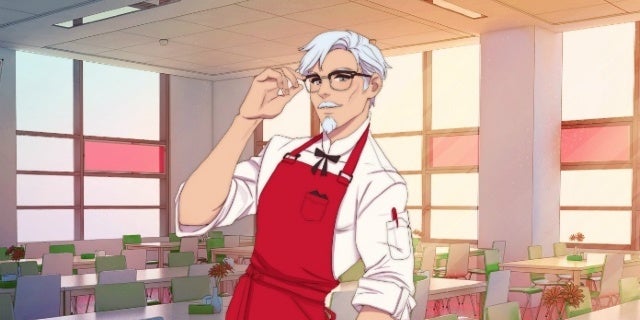 KFC is seemingly set to publish a new video game. That isn’t too strange; after all, Burger King put out a series of video games years ago featuring its own mascot. KFC is taking things a step further, however, as it appears to be publishing a dating simulator with the goal of the game being to become a partner — in several senses of the word — to Colonel Sanders.

Here’s how the video game describes itself on its Steam store page:

“I Love You, Colonel Sanders! A Finger Lickin’ Good Dating Simulator follows you, a promising culinary student, as you try to date your classmate, Colonel Sanders. Throughout your journey, you’ll be faced with life-changing decisions that will affect your chances of friendship and love. But be careful! Your choices have real consequences with real animated characters’ feelings at stake.

“Do you have what it takes to survive culinary school? Will Colonel Sanders choose you to be his business partner? Or maybe even so much more? Find out in the most finger lickin’ good dating simulator ever created—a game that KFC actually made.”

The game claims to feature a number of traditional visual novel/dating simulator elements, including a dateable Colonel Sanders and a secret ending, but it’s difficult to verify any of that as of writing given that the release date is listing as “coming soon.”

What do you think? Is this a real game that KFC actually helped make? Let us know in the comments, or hit me up directly on Twitter at @rollinbishop to talk all things gaming!