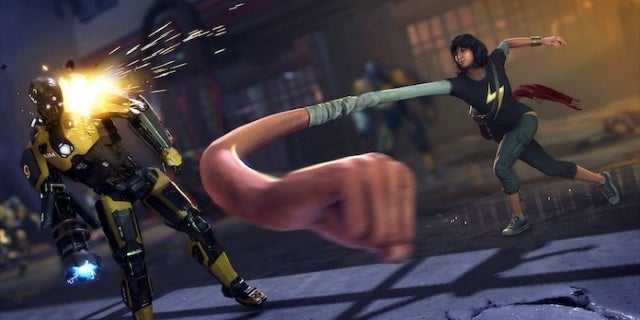 Having now been confirmed as a playable character in the upcoming video game Marvel’s Avengers from developer Crystal Dynamics and publisher Square Enix, Kamala Khan (as in, Ms. Marvel) have been receiving her expected time in the spotlight across the game’s various promotional avenues. She featured heavily at this past weekend’s New York Comic Con festivities, and now the game’s social media is also celebrating the character like it has with every other playable Avenger so far, and that includes an up-close look at Kamala Khan’s character model.

In the character profile, which you can check out below, it is mostly Kamala’s accessories and details that are honed in on in addition to her face. There’s the bangle, of course, but it’s really her satchel that packs a whole lot of personality into an incredibly small space. There’s basically a nod or wink at a half dozen Marvel superheroes, including Captain Marvel and the Avengers as keychain charms.

As a teen learning about her newfound powers, Kamala’s outfit evolution reflects her journey from fangirl to Super Hero. pic.twitter.com/5Q0g5xiQnH

What do you think of Kamala Khan (Ms. Marvel) so far? The above is just a good look at her base, casual costume — are you interested in seeing what sort of alternates the developers have cooking? Let us know in the comments, or hit me up directly on Twitter at @rollinbishop to talk all things gaming!

“Marvel’s Avengers combines an original story with single-player and co-operative gameplay in the definitive Avengers gaming experience. Assemble into teams of up to four players online, master extraordinary abilities, customize a growing roster of Heroes, and defend the Earth from escalating threats. Featuring regular content updates, Marvel’s Avengers will take players on an epic journey delivered over multiple years. This game is what’s next for the Avengers.”

Marvel’s Avengers, from publisher Square Enix and developer Crystal Dynamics, is scheduled to release for PlayStation 4, Xbox One, PC, and Google Stadia on May 15, 2020. You can check out all of our previous coverage of the Marvel-branded title right here.

Kingdoms of Amalur Re-Reckoning Pre-Order Guide: Release Date, Collector’s Edition, and More
Lost NES Game Reconstructed From Floppy Disks
The Ninjala Open Beta Is Winning Over a Lot of Players
Kingdoms of Amalur Fans Are Pumped About the Game’s Remaster
Sega Fans Are Dunking on the Game Gear Micro