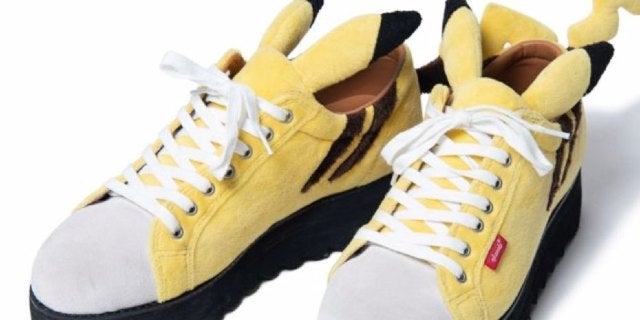 Pokemon has more merchandise available than it knows what do with. The franchise has millions of fans around the world, and they are more than happy to buy into some high-flung collectibles. Not long ago, it was announced Pikachu would be getting a shoe collection in the U.S., but it seems Japan already beat the world to the punch.

After all, one Japanese brand has released their own high-end Pikachu kicks, and they are beyond adorable. And they can be yours! That is, if you are willing to drop a decent amount of money.

Recently, social media has uncovered some of the latest line of shoes to go live in Japan. The company glamb teamed up with The Pokemon Company to create some cute shoes based on Pikachu, and they are everything fans have ever wanted.

As you can see below, the Pokemon shoes are pretty standard in design. They have a white top with yellow overlays tied together by white laces. On the side, there is a red tag which matches Pikachu’s cheeks, and the shoes have brown stripes on the back as well.

Of course, the best part of the shoes come with its tongue. There are pair of Pikachu ears hiding behind the pull, and there is even a tail attached to the heel. The soles are thick and black to give fans some extra height, and there is no doubt these kicks would put a spring in any fans’ steps.
0commentsSold in Japan exclusively, these shoes are mostly sold out save for a size 1. They measure in at 25.5 cm which is roughly a US 8.5 Mens. If you are down to get these Pokemon shoes, you can check out more details about them here but be warned! The shoes cost a minimum $250 USD before taxes and shipping, but the price tag will surely be worth it to some fans.

How badly do you want these adorable kicks? Let me know in the comments or hit me up on Twitter @MeganPetersCB to talk all things comics and anime!