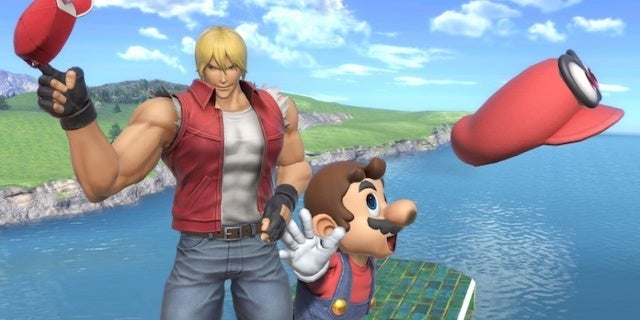 A new game-breaking Super Smash Bros. Ultimate bug has been discovered that involves the Nintendo Switch game’s new DLC character: Terry Bogard, who was released into the wild yesterday alongside a new patch. Thankfully, the bug isn’t very common and is only replicated under specific circumstances, but it’s good to know about it so you can avoid it. Recently, YouTube channel China Champ uploaded a Super Smash Bros. Ultimate video featuring what looked like — on the surface level — a plain ol’ match featuring Terry Bogard and Ice Climbers. However, not long into the video Terry Bogard goes for his special move, Buster Wolf, and what follows next is a game-breaking bug.

As Bogaed was about to unleash his special move, the Ice Climbers used their Side Special Squall Hammer. Once this happened, both the Ice Climbers and Terry Bogard completely froze. Further, the stage seemed to bug out as well. Interestingly, only one of the Ice Climbers froze, allowing the other to move around. However, the only way to break the bug and fix the game was for said Ice Climbers player to jump off the map.

As you may know, Super Smash Bros Ultimate has been plagued with similar bugs in the past. Further, this isn’t the first time this type of bug has inflicted the Ice Climbers specifically. That said, Nintendo is presumably aware of the issue and a fix should come in the next game’s update. That said, it will be interesting to see how this bug plays in competitive play until it’s fixed.
0commentsSuper Smash Bros. Ultimate is available for the Nintendo Switch. For more news, rumors, leaks, media, and information on the best-selling and critically-acclaimed platform fighter, be sure to peep all of our previous and extensive coverage of the title by clicking right here. In the most recent and related news, Super Smash Bros. Ultimate has dethroned Street Fighter II as the best-selling fighting game of all-time.

Meanwhile, as always, feel free to leave a comment or two letting us know what you think or, alternatively, hit me up on Twitter @Tyler_Fischer_ and let me know over there.