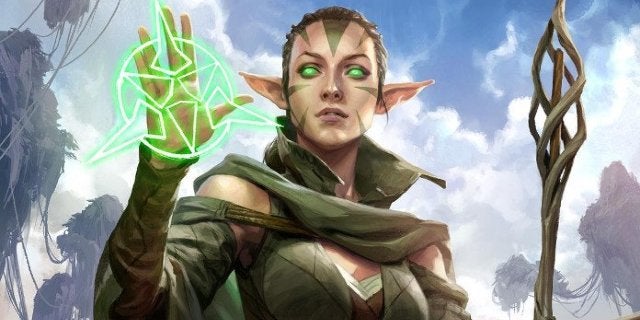 Magic: The Gathering has banned three more cards from the brand new Pioneer format. Wizards of the Coast announced that Oath of Nissa, Leyline of Abundance, and Felidar Guardian are banned in Pioneer as of November 8th in tabletop Magic and November 5th in Magic Online. The banning of these cards is intended to help prevent certain strong deck archetypes from dominating the format. “In this case there are two decks that are head and shoulders above the field: Four-Color Copy Cat and Green Devotion Ramp,” write senior game designer Ian Duke in the announcement on the Magic: The Gathering website. “These two decks have earned the most 5-0 league finishes on Magic Online and have problematically high win rates against the field. Both decks feature play patterns that would reduce metagame diversity over time. Based on Magic Online data, we don’t believe that regular metagame pressure alone will be enough to keep these strategies in check. As a result, we are banning Felidar Guardian, Leyline of Abundance, and Oath of Nissa.”

Wizards of the Coast hopes the Pioneer format will become what Modern once was, a format that is easy for newer players to transition into after experiencing their first Standard format set rotation. They want it to be a middle ground between the newbie-friendly Standard and the power-level of decks in the Legacy format. Pioneer launched with cards going back five years legal, with 2014’s Return to Ravnica set as the format’s unmoving start point.
0comments“Pioneer will utilize sets from Return to Ravnica forward,” Wizards of the Coast’s Blake Rasmussen explained in the announcement. “One goal in creating Pioneer was for the format to be large enough to have cross-block synergies to give the format its own unique characteristics. Starting with RTR gives the format that is the most different from Modern, since Modern launched right before RTR.”

What do you think of the Magic: The Gathering bans? Let us know in the comments.