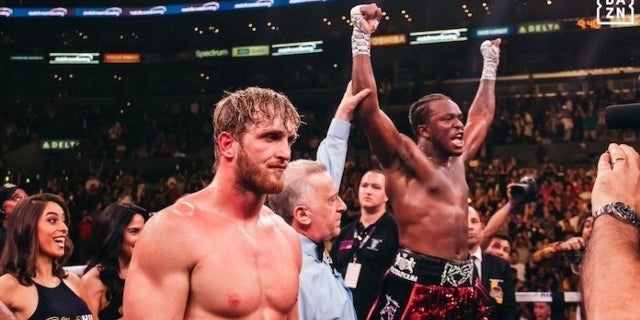 Gaming
Share on Facebook
Share on Twitter
Share on Google+
Share on Pinterest
Share on LinkedIn
Tonight at the Staples Center in Los Angeles, British YouTuber Olajidge “JJ” Olatunji — best known as KSI — stepped into the ring with American YouTuber Logan Paul, and while both managed to go six rounds with each other, ultimately it was KSI who came out on top after winning in a split decision. That said, as you would expect, it wasn’t a clear cut victory, with many coming out and saying that Logan Paul was robbed by the ref and judges.

For those that missed it: at one point in the fight, Logan Paul knocked down KSI with an impressive punch, earning himself points in the process. However, while KSI was down, Paul hit him in the back of the head, which is illegal. Sometimes, warnings are given for this, but the ref decided to deduct two points for the illegal hit. A huge moment in the fight, many fans weren’t convinced Paul should have gotten a point deduction. Meanwhile, many took to social media to say congrats to KSI, while others left the spectacle unimpressed.

“The two points that I got taken away from me was the reason I lost tonight.” 💬#KSILoganPaul2 pic.twitter.com/kBYDFFmAIf

That knockdown was clean, deducting 2 points is a joke 😂robbed of a fair fight #KSIvsLogan2

Robbery 🤣 them two deducted points have done Logan! What a farce! #KSIvsLogan2

Sorry wtf…. did someone get paid off for tonight’s results #KSIvsLogan2

As always, feel free to leave a comment or two or three letting us know what you think or hit me up on Twitter @Tyler_Fischer_ and let me know over there. Was Logan Paul robbed or was KSI simply the better fighter? And more importantly, how was the fight? Did it live up to the hype?