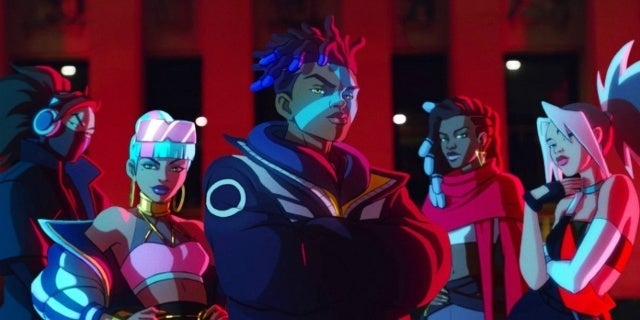 If you weren’t already aware, today marks the League of Legends World Championship Finals. The most recent set of competitive matches are coming to a head for incredibly popular MOBA video game from Riot Games, and that typically coincides with a special event or two from the developer. This year, that’s the introduction of a new virtual hip-hop collective called True Damage, and the group’s first music video.

The actual single, video, and group introduction had previously been announced, but knowing it was coming and seeing it in action is another thing entirely. True Damage features League of Legends champions Akali, Ekko, Qiyana, Yasuo, and newly introduced champion Senna, and the first single, “Giants,” is basically all about how they’re here now and nobody can stop them. It’s a catchy tune, but we’ll see if it has the staying power of last year’s “POP/STARS” from K/DA.

Much like last year, Riot Games had an actual performance of “GIANTS” ahead of the first game in this year’s finals. You can check that out below:

Here’s how League of Legends describes True Damage in the description of the group’s first single, “Giants”:

“Formed by K/DA’s rapper Akali (SOYEON of (G)I-DLE), True Damage is a virtual hip-hop group that fuses the raw vocal talents of Ekko (Thutmose, Duckwrth), Senna (Keke Palmer), and Qiyana (Becky G) with Yasuo’s signature production in a cutting-edge collaboration.”
0commentsWhat do you think of the first True Damage music video? Are you excited to see Riot Games move even further into this space? Let us know in the comments, or hit me up directly on Twitter at @rollinbishop to talk all things gaming!