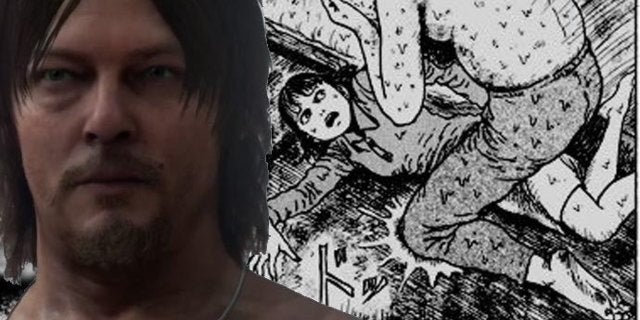 Junji Ito has had a rather busy year. Not only did the manga icon win an Eisner Award thanks to his work on Frankenstein, but he’s been brought into headlines time and again. First, a trip to the U.S. for Crunchyroll Expo pique interest, and it seems Ito is back in the news again. But this time, his notoriety is all thanks to a little game called Death Stranding.

Yes, it turns out Hideo Kojima struck again. The heralded game developer put out his own studio’s first game this month, and Death Stranding has wowed fans. Though decisive in reviews, gamers have universally praised Death Stranding for its complex narrative, and it just so happens Ito pops up in the story.

As pointed out by Twitter user hana_av, the manga creator shows up in Death Stranding. The artist is shown via a projection as he meets Sam, the game’s lead played by Norman Reedus. The hologram is not around for long, but the cameo was long enough for manga nerds to connect the character with Ito.

Of course, it is a good thing Ito shows up in the game when he does. The man is known as The Engineer who upgrades Sam’s gear and lets him carry more packages. Ito’s role is just one of several cameos which appear in the game. For instance, Guillermo del Toro takes on a role known as Deadman who assists Sam throughout his journey. And of course, who can forget about Conan O’Brien’s whacky cameo where he gives players the ability to swim?

While this cameo may surprise some, fans of Kojima aren’t too taken aback. After all, the pair have worked together in the past. Ito and Kojima helped bring the iconic horror demo P.T. to life years ago. While the title has since been canceled, Kojima has not forgotten the bonds he forged with its team and kept the creative spirit of P.T. alive. Those forces came together once more for Death Stranding, and manga lovers are glad to see Ito getting credit where it is surely deserved.
0commentsWhat do you make of this clever little cameo? Let me know in the comments or hit me up on Twitter @MeganPetersCB to talk all things comics and anime!

Death Stranding is available to play on PlayStation 4 and Microsoft Windows now.