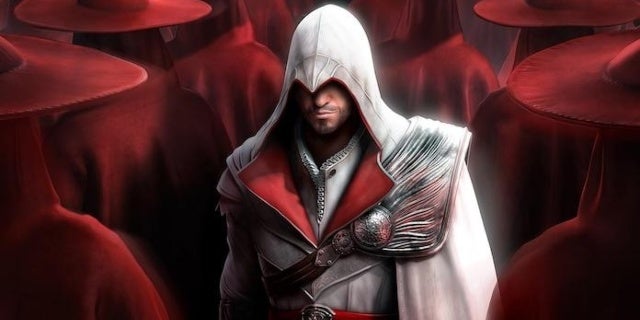 Ubisoft has announced a brand new Assassin’s Creed experience, dubbed Assassin’s Creed Gold, the first Assassin’s Creed audio drama coming to Audible sometime next spring. That’s right, while Ubisoft is making you wait for the next Assassin’s Creed game — which hasn’t been announced yet, but is suspected to release in 2020 — it does have something coming in the near future for hardcore fans of the long-running series. According to Audible, Assassin’s Creed: Gold follows the story of Aliyah Khan, a card shark and hustler who has been dealt a crummy hand in life. Forced to survive through street scams and rely on her street smarts, Aliyah’s life is defined by the struggle of simply staying alive and getting by. However, after one beta with a mysterious older man named Gavin Banks goes terribly wrong, her only option is to repay Banks by becoming an Assassin. It’s during her training for this new role that she learns about the history and centuries-old battle between two groups: Templars and Assassins. But that’s not all, Banks has found an illegal form of currency from the Great Recoinage of 1696 with a secret message inscribed on it, and he’s going to use Aliyah to find out what it means.

At the moment of publishing there’s been no word of a precise release date. However, what there has been word of — in an unofficial capacity — is the next Assassin’s Creed game, which you can read more about right here.

GWEN STACY Meets THE MAKER in GHOST SPIDER #7 First Look
REVIEW: Nintendo’s THE WITCHER 3: WILD HUNT is a great handheld adventure
Made in Abyss to Get Sequel Anime!
INDIE VIEW: ‘In Pieces: Someplace Which I Call Home’ provides Ipswich, Massachusetts with its close-up
Review: STAR TREK: PICARD Warps Onto TV With an Okay Premiere Episode – SPOILERS