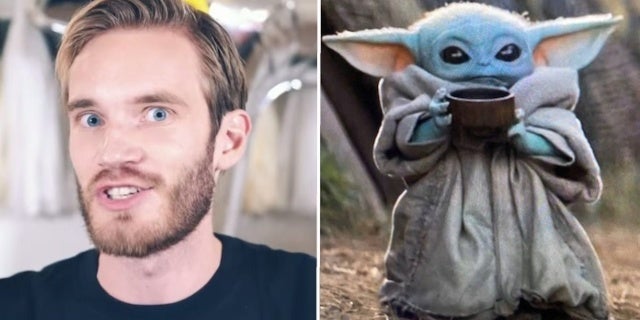 For the past couple of weeks, everyone has fallen in love with Baby Yoda and has been talking about the Star Wars character endlessly. As a result, some people are getting sick of hearing about the cuddly green alien, including PewDiePie, the world’s most popular YouTuber. The king of YouTube revealed his true feelings on Baby Yoda during a recent episode of Meme Review, and how he would get rid of the character once and for all if he could, even if it means taking drastic measures.

According to PewDiePie, in order to get the Internet to shut up about Baby Yoda, he would do just about anything, including eating the adorable little character from Disney’s new Star Wars show, The Mandalorian. “I would eat Baby Yoda, if that’s what it takes to get rid of him,” said a candid PewDiePie.

“If someone came and knocked on my door right now and said, ‘Hey, we have Baby Yoda, we’ve buttered him up in oil, we’ve fermented him for three days straight… he’s still going to taste like sh*t, but if you eat him, he will go away forever,’ I wouldn’t even hesitate. I would inhale Baby Yoda.”

Of course, while PewDiePie may not be a big fan of Baby Yoda, his displeasure and willingness to turn the character into a midnight snack will not be enough to stop the Baby Yoda hype train, which hasn’t just led to a million memes, but is already spawning collectibles and things for you to buy the Baby Yoda fan in your life.

For those that don’t know: Baby Yoda was revealed during The Mandalorian, which is set after the fall of the Empire and before the emergence of the First Order. With Janjo and Boba Fett gone, a new warrior emerges, a lone gunfighter in the outer reaches of the galaxy, far from the authority of the New Republic.
0commentsAs for PewDiePie, you can find more coverage of the YouTuber by clicking right here. In the most recent and related news, the YouTuber revealed last month what’s incredible about the Sonic the Hedgehog redesign.