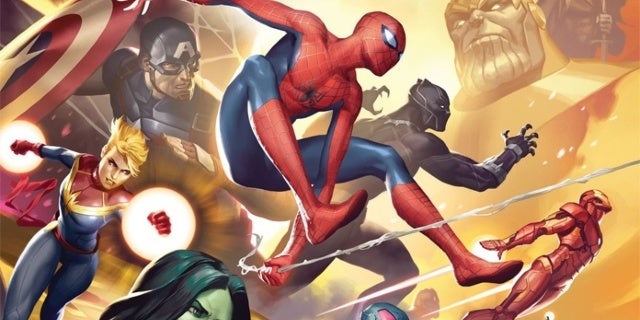 Fantasy Flight Games recently made Marvel Champions fans quite happy with the new that the previously announced Hero Packs and Scenario Packs would be releasing a whole month early to help close out 2019 with a bang, but the fun isn’t stopping there. Fans can look forward to even more content coming down the pike in 2020, and the team recently revealed that the game is getting four new Hero Packs throughout the first half of the year as well as a Story expansion, and now we know whey they will be releasing.

The first was recently revealed as the Thor Hero Pack, which you can find out more about right here. In addition to the big reveal Fantasy Flight also teased three more Hero Packs with silhouettes and release dates, and you can see the teaser image and the full schedule below.

So, it would seem the first image is of a female superhero, with hair in a long ponytail. There are a few people that description could fit, though right off the top of our head Elsa Bloodstone would fit the bill, as would Storm or Kate Pryde, who have sported that look in the past and relatively recently.

The second image seems like maybe it is Iron Fist, while the third is anyone’s guess. You can also see a part of the Story Box description, but we still don’t quite know what that will be.

“Iron Man and Black Panther team up to stop Rhino from rampaging through the streets of New York. Captain Marvel and Spider-Man battle Ultron as he threatens global annihilation. Do you have what it takes to join the ranks of these legendary heroes and become a champion?

Jump into the Marvel Universe with Marvel Champions: The Card Game, a cooperative Living Card Game® for one to four players!

Marvel Champions: The Card Game invites players embody iconic heroes from the Marvel Universe as they battle to stop infamous villains from enacting their devious schemes.
0commentsAs a Living Card Game, Marvel Champions is supported with regular releases of new product, including new heroes and scenarios—check out the products section at the bottom of this page to see everything announced so far!”

Marvel Champions is available at your local game store now. Let us know what hero you want to see next in the comments, and feel free to hit me up on Twitter @MattAguilarCB for all things tabletop!