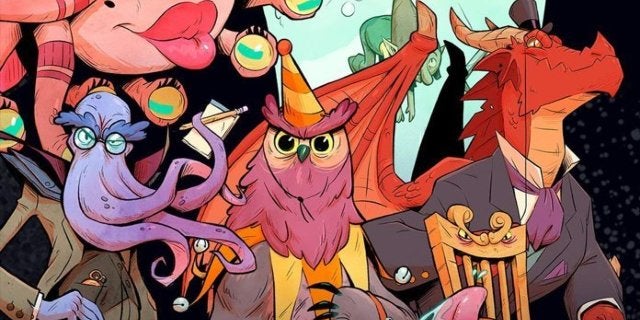 The third installment of the Dungeons & Dragons card game Dungeon Mayhem has launched, and they needed a big box to cram in all of the monsters. Get ready for Dungeon Mayhem: Monster Madness, which has just gone up for pre-order on Amazon for $24.99 with shipping slated for February 14th. There’s your Valentine’s Day gift right there.

In Dungeon Mayhem: Monster Madness you’ll play as one of six iconic D&D monsters (which are delightfully illustrated by Cam Kendell): Delilah Deathray (Beholder), Dr. Tentaculous (Mind Flayer), Blorp (Gelatinous Cube), Mimi Lechaise (Mimic), Lord Cinderpuff (Red Dragon), and Hoots McGoots (Owlbear). Each of these monsters has their own 28-card deck with unique ways “to charm, crush, disintegrate, and devour their foes”. These creatures can also be pitted against any other Dungeon Mayhem deck.

Note that the big Dungeon Mayhem: Monster Madness box holds all six decks, plus all the base game and expansion decks. It also includes new multiplayer roles that allow you to battle with as many as six players.

If you are unfamiliar, Dungeon Mayhem is a fast-paced, free-for-all battle card game that’s easy to learn. The official description for the base game reads:

“Play as one of four brave, quirky characters—Barbarian, Paladin, Rogue, or Wizard—battling it out in a dungeon full of treasure! With magic missiles flinging, dual daggers slinging, and spiked shields dinging, it’s up to you to prove your adventurer has the guts to bring home the glory!”

“Illustrations created by Kyle Ferrin in the four decks of cards represent Sutha the Skullcrusher (barbarian), Azzan the Mystic (wizard), Lia the Radiant (paladin), and Oriax the Clever (rogue). Pick one of these characters and play their mighty power cards such as Azzan’s Vampiric Touch to swap hit points with an opponent or Sutha’s Whirling Axes to heal yourself while dealing crushing damage to the rest of the party.”
0commentsThe Dungeon Mayhem base game and the Battle for Baldur’s Gate expansion are available here.

Note: This is not a sponsored post, but if you purchase one of the awesome products featured above, we may earn a small commission from the retailer. Thank you for your support.