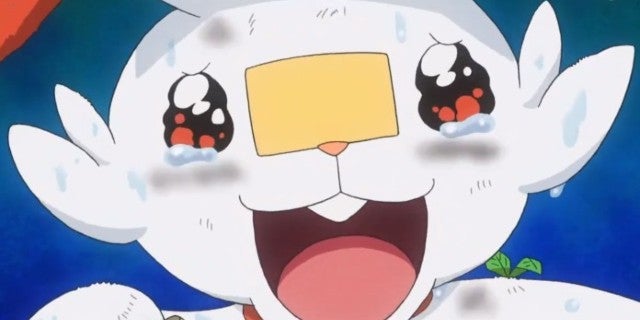 Pokemon‘s current anime series has evolved in a much different fashion than the other iterations thus far. While there’s still no telling just how long this will last given how early into the new series we are, it’s about to make its way through the new Galar region of Pokemon Sword and Shield. This also means that Go, the new protagonist of the series, will be getting his very first Pokemon. But it’s going to be a bit more complicated than one would expect after seeing just how well he got along with the Scorbunny in the previous episode.

The synopsis for the next episode of the series teases that Go will be making a decision as to his very first Pokemon. Because now that Scorbunny has followed them all the way to the Wild Area from Wyndon, it’s willing to tag along with Go as his Pokemon. But…Go wants to catch Mew first.

Episode 5 of the series is titled “Snorlax Grows Gigantic?! The Mystery of Dynamax!!” and the synopsis for the episode (as shared by @Arkeus88 on Twitter) teases as such, “Ash and Go have gone to the Galar region in order to investigate the matter of Pokemon growing to gigantic sizes. And now they’ve finally reached their destination, the Wild Area! As the duo explores the place, which consists of beautiful grassland spreading out as far as the eye can see, they find an incredibly huge Snorlax. Could this Snorlax be one of those Pokemon that have grown to gigantic sizes?”
0commentsBut the real nugget comes in the final bit of the synopsis, “In addition, Scorbunny, the Pokemon they met in Wyndon, has followed Go to the Wild Area as well. Will it be able to meet Go again without getting into any trouble?” So before even meeting with Go again, Scorbunny will be going through all sorts of trouble. This includes Go, who began his journey in the hopes of someday catching the Legendary Pokemon Mew…but this Scorbunny might change things.