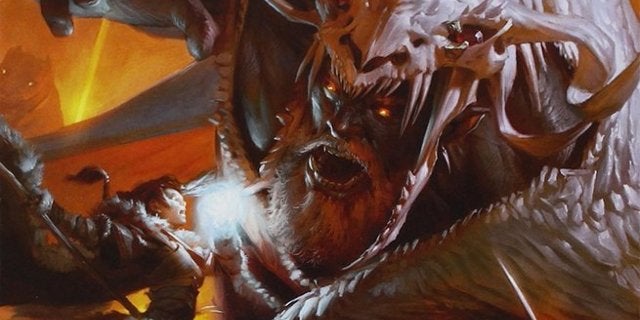 The cover to Dungeons & Dragons’ next book has been posted online by Barnes & Noble. Dungeons & Dragons is set to announce its next publication later today, but surprising details about the book broke yesterday due to leaks by online retailers. Amazon was the first to reveal that the new publication is called Explorer’s Guide to Wildemount and will detail the world explored by Critical Role, the biggest D&D webseries and a large reason for the game’s resurgence over the last few years. After Amazon leaked details about the book, Barnes & Noble leaked the cover on its webpage earlier today. The cover shows the leaders of Wildemount’s two major factions – the Bright Queen and King Bertrand Dwendal – while a Luxon Beacon stands between them. You can check out the cover below:

Explorer’s Guide to Wildemount will serve as both a campaign setting sourcebook and an adventure book that will provide players with plenty of details and secrets about the world of Critical Role, along with several new subclasses, monsters, and spells. Amazon’s description of the book notes that it will contain details about Dunamancy, a possibility-warping magic system practiced by the Kryn Dynasty, while also listing statblocks for the legendary Vestiges of Divergence, which were used by Critical Role‘s first campaign.

The new book shows Dungeons & Dragons‘ commitment towards reaching out to new players and fans, many of which are totally unfamiliar with the classic D&D settings of the Forgotten Realms or Greyhawk. This also brings the world of Exandria, which will be further explored in a Critical Role animated series coming out on Amazon Prime later this year, officially into D&D’s canon.

We’ll have additional details about Explorer’s Guide to Wildemount when the book is officially announced later today. Stay tuned to ComicBook.com for more details or find me on Twitter at @CHofferCBus to talk all things Dungeons & Dragons and Critical Role.