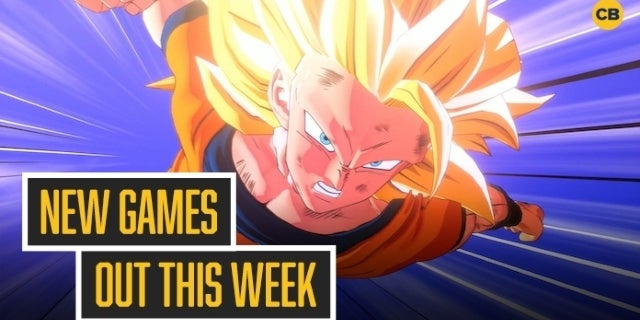 We are about halfway through the first month of 2020, which means new video games releases on PS4, Nintendo Switch, PC, Xbox One, and other platforms are back. This week is perhaps the first week of 2020 with worthwhile new games worth plunging into, including another Dragon Ball adventure, a promising battle royale game, and a Wii U game being given new life on the Nintendo Switch.

As always, if you’re looking for every single new video game release on every single video game platform, this ain’t your saloon. However, if you’re looking for the new games dropping this week that are worth giving the good ol’ quick gander at, then don’t click away, because that’s exactly what we got: a quick rundown of each and every salient new game that is releasing this week. In addition to prominent new releases, there’s a round-up of ports included at the bottom. Meanwhile, remakes, remasters, and expansions are included, but minor DLC releases that give your horse armor or add a tinsy bit of content are not. Further, early access releases don’t make the cut either. Lastly, while mobile games occasionally crack the rundown, this is mostly console and PC games, with some Stadia joints thrown in here and there when applicable.

Pitch: “Relive the story of Goku and other Z Fighters in Dragon Ball Z: Kakarot! Beyond the epic battles, experience life in the Dragon Ball Z world as you fight, fish, eat, and train with Goku, Gohan, Vegeta and others. Explore the new areas and adventures as you advance through the story and form powerful bonds with other heroes from the Dragon Ball Z universe.

Pitch: “Darwin Project is an outdoor, futuristic, battle royale style deathmatch with a strong emphasis on hunting, trapping, and survival. Not only will you be pitted against fierce rivals, but you’ll compete for the favor of an all-seeing Show Director.”

Pitch: “The worlds of the Fire Emblem series and Atlus games have crossed paths again and the result is coming to the Nintendo Switch system. An inter-dimensional evil has invaded modern-day Tokyo, resulting in this fantastical barrage of music, style, and yes, danger. So, fight back! Battle through dungeons to pump up your strategy and creatively decimate your foes… before all hope fades to black.”

Developer and Publisher: Atlus and Nintendo

Pitch:  “It’s the end of the 20th century, on a historic timeline different from that which we know. A man-made island off the coast of Okinawa is humming with a dirty, exotic vibe—and it’s awesome!”

Pitch: “The ‘Kraken’ expansion adds hours of narrative-driven content with a brand-new storyline and location, as well as a wealth of new weapons, implants and armor to discover and craft. On the outskirts of Jericho City, enter the VBS Krakow, a massive decommissioned aircraft carrier retrofitted as a retreat for the rich and famous. Battle robot pirates, deranged security systems, and an imposing new boss, each with their own unique combat mechanics. Fight hard and uncover the truth behind the desolate military vessel!”

Pitch: “To the Moon is a story-driven experience about two doctors traversing backwards through a dying man’s memories to artificially fulfill his last wish.”

Pitch: “Stories Untold is a narrative-driven experimental adventure game, that bends the genre into something completely unique. Combining a mix of classic text-adventure, point-and-click and more, four short stories are packaged together into a single mysterious anthology.”

Developer and Publisher: No Code and Devolver Digital