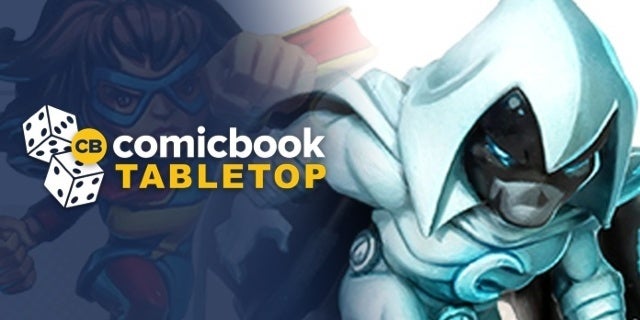 CMON and Spin Master Games’ Marvel United has been a huge hit on Kickstarter, and as a result, fans will have plenty of their favorite Marvel heroes to play as when the anticipated game releases later this year. While we’ve seen some of the fantastic game piece sculpts revealed through stretch goals, we haven’t actually had a chance to see what those game pieces would look like fully painted, until now that is. Earlier today we revealed Captain Marvel and Nova, and now we can exclusively reveal two more fully painted hero game pieces for you to drool over, which includes the fan favorites Moon Knight and Ms. Marvel. BigChild Creatives delivered some stellar paint jobs here, and trust us, you’ll want to get these painted ASAP after seeing them up close.

First up is Moon Knight, and if you thought the game piece itself was awesome, just check it out fully painted. The light blue wash makes his all-white costume look amazing, and the black shadows under his hood and cape really make the other colors pop. The level of detail extends to his base, which seems to be the edge of a rooftop or building, and it looks gorgeous.

Next up is Ms. Marvel, and the colors are so bright and vibrant here. The blues used on the costume help set the tone while the red and yellows really make everything else pop, especially Ms. Marvel’s sash, which adds some motion and fluidity to the game piece. The paint application on the traffic light and Kamala’s hair also makes it feel as if the piece is part of an overall scene, and it’s that level of detail that really makes it shine.

Now, game pieces will come unpainted in the game that ships, but this just gives you an idea of what they could look like with a little time and paint. You can either do it yourself once you get the game or have someone else with that skillset take their stab at it, but looking at these, we’re sure whatever method you go with will be worth the effort.

You can find the official description for Marvel United below.

It’s time to become the Heroes you were always meant to be! Designed by Eric M. Lang and Andrea Chiarvesio, Marvel United is a fast-paced cooperative game where players take control of Marvel Super Heroes and band together to thwart the master plans of the most dangerous Villains in the universe. With an all-new visual take by Edouard Guiton, brought to life in fantastic sculpts, Marvel United will challenge you and your friends. Only by standing united will you have any chance of victory!

Marvel United is on Kickstarter now, and you can check it out right here. Make sure to check back right here for more Marvel United coverage, and you can follow me on Twitter @MattAguilarCB for all things tabletop!
Did you know ComicBook.com has a Pokemon podcast? That’s right folks, A Wild Podcast Has Appeared is available every Thursday bringing you the best breakdowns of the week’s biggest news from Jim Viscardi, Megan Peters & Christian Hoffer. Catch the newest episode right here or subscribe on iTunes today!