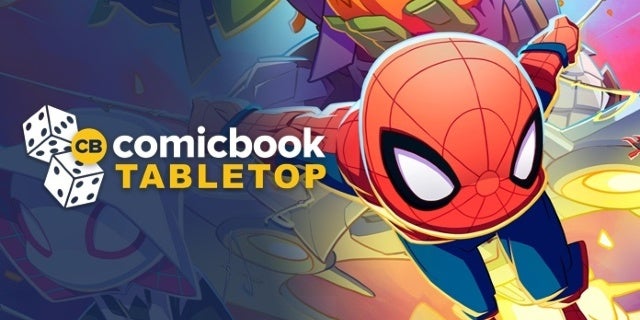 Marvel United has revealed many of your favorite heroes and villains, and now they’ve expanded to the Spider-Verse for their next big expansion. CMON and Spin Master Games recently revealed that the newest expansion will bring some of your favorite spider-themed heroes to the game as well as an iconic villain to keep them busy, and as you can see below the new set will feature Spider-Man (Peter Parker), Ghost-Spider (Gwen Stacy), Spider-Man (Miles Morales), and the Green Goblin, who can be seen utilizing his Goblin Glider, which he will use to drop Pumpkin Bombs all over the city, and you’ll need to use your Spider-team of heroes to stop him.

As you can see in the image below, the sculpts look amazing, especially Goblin’s, but the expansion isn’t just bringing new game pieces to Marvel United. Along with those pieces, fans will also get a new mechanic introduced into the game called the Secret Identity Challenge, and here’s how it works.

Like other challenges in the game, the Secret Identity Challenge will make it more difficult for the heroes to clear the city of foes. Players will put a Journalist token in each location adjacent to the hero’s starting location and one where the villain beings the game. Whenever a hero performs an action other than Move with a Journalist in their location, they gain an Exposure token.

If a hero ends up with 3 of these Exposure Tokens, their secret identity is revealed, which will cause them to have to cover up who they really are and miss out on a turn. It also means they will have fewer resources to pull from on their next turn. To avoid this happening, you can move Journalist tokens around the map by spending Heroic actions.

You can find the official description for Marvel United below.

It’s time to become the Heroes you were always meant to be! Designed by Eric M. Lang and Andrea Chiarvesio, Marvel United is a fast-paced cooperative game where players take control of Marvel Super Heroes and band together to thwart the master plans of the most dangerous Villains in the universe. With an all-new visual take by Edouard Guiton, brought to life in fantastic sculpts, Marvel United will challenge you and your friends. Only by standing united will you have any chance of victory!

Marvel United is on Kickstarter now, and you can check it out right here. Make sure to check back right here for more Marvel United coverage, and you can follow me on Twitter @MattAguilarCB for all things tabletop!
Did you know ComicBook.com has a Pokemon podcast? That’s right folks, A Wild Podcast Has Appeared is available every Thursday bringing you the best breakdowns of the week’s biggest news from Jim Viscardi, Megan Peters & Christian Hoffer. Catch the newest episode right here or subscribe on iTunes today!

DC finally reveals the alternate BATMAN: A DEATH IN THE FAMILY art in which Jason Todd lived
The Watchmen are here to tell you to wash your grubby little mitts
DYNAMITE ENTERTAINMENT June 2020 Solicitations
The Seven Deadly Sins: Anger’s Judgment To Air in October!
Show By Rock!! Gets New TV Anime Adaptation!